My dear father-in-law visited us in March.  As the kids were in school and Prakash was at work, we got to spend a lot of time together.  He kept praising our family blog and I encouraged him to be our first GUEST WRITER – I was thrilled when he enthusiastically accepted my offer!  He is a special person… pedestalized by many, generous beyond measure, saintly…  Here is a glimpse of his experiences, thoughts and observations of his first visit to Kathmandu…

Grabbing a snack at the bakery while roaming the streets of Kathmandu.

*************************************************************
March 19 – My Jet Airways plane flew from Mumbai to Kathmandu. “We are approaching Kathmandu” the message I was waiting for. I looked out and boy, there were mountains after mountains! “Is there any flat land for this plane to land?” was the question in my mind as I saw the great white peaks of the Himalayas welcoming me. So, it was true what my friends in Belgaum were saying, “You are going to Himalayas, not Nepal!” The plane started descending and I was happy to read the name of the airport “Tribhuvan International Airport”. Indeed, all three bhuvans – heaven, earth and hell – are present in Himalayas. Prakash came to the airport and introduced me to their taxi-driver Dhankumar, a friendly person. Everyone here is friendly and acts as an extended family member said Prakash. Dhankumar was the first one I met in Prakash’s extended family. After coming home, I met two other extended family members – Tikaram (called as Tika Dai; Dai means older brother in Nepali) and Sonu Didi. I and Charu had heard about them. Nita was having some stomach problem. Tika Dai was giving her a tablet and a glass of water. The way the offering was done with care and love, it moved me to tears. What wonderful people Prakash’s family is living with! I thanked God for all this in my night prayer! 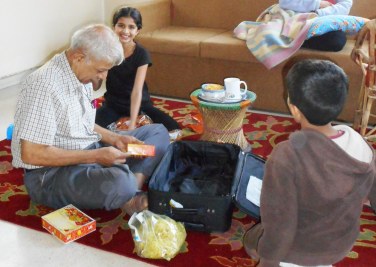 Kiddos excited to see and TASTE all the treats brought from home.

March 20 – Nita wanted to see the doctor. Her friend, Bahar Kumar, gave her ride to the doctor. I accompanied them. While Nita was with the doctor I and Bahar were waiting in the lounge. Within minutes, we established a wonderful father-and-daughter relationship. We talked about our families. She lost her father a year ago. She felt very good talking to me about her family. She told about her son’s trekking experience at school, although he is not very strong for the exercise. The time passed and I also got close to one more member of their extended family.

March 21 – On Ugadi day (Indian New Year’s Day), I happened to go to Pashupatinath Temple, the most prominent Lord Shiva Temple in Nepal. It was Saturday, so we went early to avoid the rush. Shanthi and her parents, friends that were visiting that weekend, accompanied myself and Prakash. We met a nice priest (God sent), who performed Rudrabhishek with 5 Brahmins. The entire pooja was performed very calmly, and the priests did not rush. One person came to help us for darshan. We saw the God from all 4 doors. The statue has 5 heads as the name of Shiva says “panchanan”.

March 22 – One of Nita’s friends told her that we could attend the chanting of Buddhist monks in their monastery, Seto Gumba. This monastery is different from the famous Stupas of Boudha and Swayambhunath. In Seto Gumba, there was a big hall with a huge golden Buddha statue. Around 150 monks in their maroon robes sat and chanted for an hour. I did not understand a single word (Tibetan language); other than occasionally some sound similar to Aum / Om. After the chanting, the monks disappeared in minutes. Nita’s friend walked us near the statue and we got a closer look. This was the first time in my life I attended such a function. It was a unique experience.

Golden Buddha statue in the garden of the monastery.

March 23, 2015, Prakash and his 4 colleagues were going around the city in ICIMOD’s van. I accompanied them. The project was to find some emission producing spots where the company can setup their equipment and measure the emissions. We had to select the spots on the roads for vehicle emissions and trash burning around houses. The roadside criteria were funny. One was number of vehicles, another was slope. They had to select both up and down slopes and some flat spots. The background noise meant some other source of emission should not be there. Because of the background a spot in the neighborhood of some car painting shops were rejected. The wind would take away the emission so we had to seek non-windy spots. Most of all the safety for their equipment and operators was a key factor. We went to several spots and using the criteria selected some spots. Then we went to some house holders who would not object measuring the emissions from trash burning. One small industry had a generator which was used in case of power outage. The measurements should be done when the power goes off. All these criteria were fun to consider. A good experience for me and the gang!

Does this street meet all of the criteria?

March 24 – Kids and Nita went to school. Prakash was going to work by bus. I accompanied him to the bus stop. On the way back, I tried to remember the roads. While coming home I got lost. I did not know the address of Prakash’s home, nor did I have any mobile number or diary which had phone numbers of Prakash or Nita. Only thing I remembered was ICIMOD and The British School. I asked people the directions for The British School. Everybody was helpful. My Hindi jived with their Nepali and I made it to the school! The security guard at the gate knew English. I told him that my grandkids go to this school and I am lost. He let me in. After hearing that I am lost, the receptionist with a chuckle offered the school desk phone. I said I do not remember the phone number. She found Nita’s phone number and called her. Nita came to rescue me. Thank you Lord that I remembered the School Name and it was not closed!
Later that day, Nita and I went to a see a cycle factory. The owner is Caleb Spear from Colorado, USA. His wife is also from Colorado and their 2 kids are the same age as Sajjan and Janani. After seeing the use of bike by Nepalis, Caleb came with an idea of extending the middle bar and carrier of the bike so that 3 or 4 people can sit on it comfortably. It can carry a lot more load than an ordinary bike. Everything is done in Caleb’s shop of Caleb. He is the inventor of this modified bike. And all of this is from the view of helping poor people in Nepal. He takes nominal profit to keep his family running. All workers in his shop are local Nepali people. Everything from cutting rods, bending pipes and soldering is done here. They extend the chain for the length of the cycle. The bicycle can also be used as a motor to run a washing machine or a corn kernel remover. I was so impressed with their work. While talking about local workers, Caleb mentioned that new employees often get training in the shop itself and after a couple of months they will either go find a job elsewhere or abroad. Some do stay in the same shop. When new employees finish training, their salary increases, they get a provident fund and health coverage! Another great man created by God to take care of His people!!

Caleb and I chatting in this workshop.

March 25 – Today I went to Prakash’s workplace, ICIMOD. ICIMOD’s emblem says “For people and mountains” – what a wonderful environment to work. There were breathtaking pictures of Himalayan regions taken by various employees in their photography competitions. While leaving the office I told Prakash’s colleagues that “I envy my son”. I was under the impression that ICIMOD is working on emission control and global warming control. When Prakash showed me the pamphlets on over a dozen or so projects I was zapped. One of the projects was as follows: Many Nepali men go to Middle East to earn money. This leaves the woman of the house in charge of cooking, children’s education and the work on the farm. The project is to help this woman on farming by providing better tools to use and growing various different crops to get more yield, for example strawberries. This was started by foreigners and their governments with no intentions of any rewards in return; only to help the people and mountains in Hindu Kush Himalaya (HKH). Again the world is held together because the God has created such caring people!!

After ICIMOD, I went to The British School. There was the first of four performances of a drama called Scheherazade, Tale of the 1001 Arabian Nights. The hall was full of parents and non-participant students. There were over one hundred students participating in the drama including Sajjan and Janani. The idea of making a cave formed by a pyramid of students wearing black clothes was fascinating. When Janani sang her solo song, “Please Tell Me a Story” the entire theatre was stunned! Her beautiful voice kept ringing in our ears even after the song was over. The other girl who sang with her was also great. How much co-ordination efforts the teachers put to make it successful. It went flawlessly! Great!!

Janani and her classmates in the school drama.

March 26 – Today Sumanth became 6 years old. In Belgaum, Charu and I made a special greeting card for him. It took us quite a long time to make it work! First day we spent time up to 11 o clock at night making various corrections and on the second day by noon the card was ready. After seeing the special card, both Janani and Sajjan were curious to make one like that and WALLA!!! Janani made one in just a few hours. In the evening Nita and Prakash went to see Sajjan and Janani’s 4th and last play leaving myself alone with Sumanth. We had a ball! I told him various stories, and he played with the candies he was given. 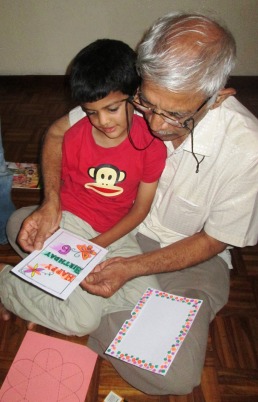 As you removed the black and white card from its sleeve, color magically appeared! Tricky illusion using 1 clear sheet and a few plain papers.

My overall impression about Nepal and Nepali people is that it is a very nice country to live in. There is excellent scenery to see as soon as you get up over the country in the plane before even landing. And, the very friendly people join you as if they are family members. Many foreigners who come and work hard to improve the lifestyle of locals is an excellent example to follow. 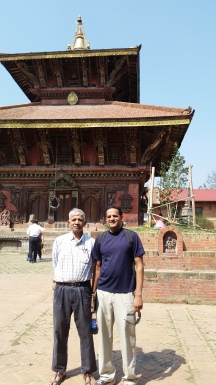 Prakash and me in Bhaktapur.

7 thoughts on “My First Visit to Kathmandu, Nepal… by Viththal Bhave”