Today, I went on an investigation to the zoo instead of working in the classroom.

We walked to the zoo from our school instead of taking the bus! On the walk, we walked single-file in our groups. My group leader was Ms. Shrestha, the assistant teacher from my class. There were five groups. There was Ms. Bloor, Ms. Amatiya, Ms. Middleton, Ms. Westlake and Ms. Shrestha. There were 6 kids in my group. Their names were Jack, Kasem, Freida, Suravi, Neenama and me. The two teachers in our group were Ms. Shrestha and Ms. Silwal. At the zoo, we had to finish four activities before we walked back to school. These activities were: a zoo questionnaire in which you had to ask people different questions ; sketch an animal that you liked ; find out information about the animals ; draw a tally chart of how close to extinction the animals are. Right when we got to the zoo, we ate our snack. We played around for a bit after eating our snack and I took a photo of two of my friends, William and Pemba.

We were about to go towards the tigers when Jack spotted that we didn’t go to the rhino. The rhino was huge compared to the swamp deer. He was eating grass when we were at his enclosure. The rhino looked very sad because the other rhinos of his type were separated into different enclosures.

After the water buffalo, we saw the jackals. Their enclosure was very smelly because they use urine to communicate with other jackals! 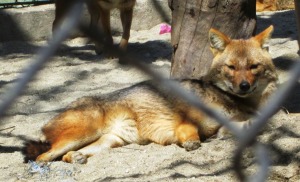 Next we went to the huge bird section. I spotted a very colorful bird that looked like a tiger! The bird section wasn’t as entertaining as the monkeys, water buffaloes and tigers.

Towards the end we went to the crocodiles. These crocodiles had a very long snout. It looked like a corpse in the sand because it was very sunny and the animals were very still. 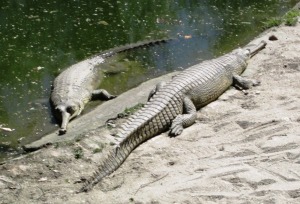